Yesterday Maine voted to restrict marriage to opposite-sex couples. It’s a sad day for people who believe that all couples who love each other should be allowed to marry, full stop.

But the chart below may cushion the blow a tiny bit. It’s from a paper by Jeffrey Lax and Justin Phillips, “Gay Rights in the States: Public Opinion and Policy Responsiveness,” recently published in the American Political Science Review (via The Monkey Cage). What you are seeing is support for same-sex marriage in 1994-96, 2003-04, and 2008-09; solid dots indicate that same-sex marriage is equal, hollow dots that it is not. 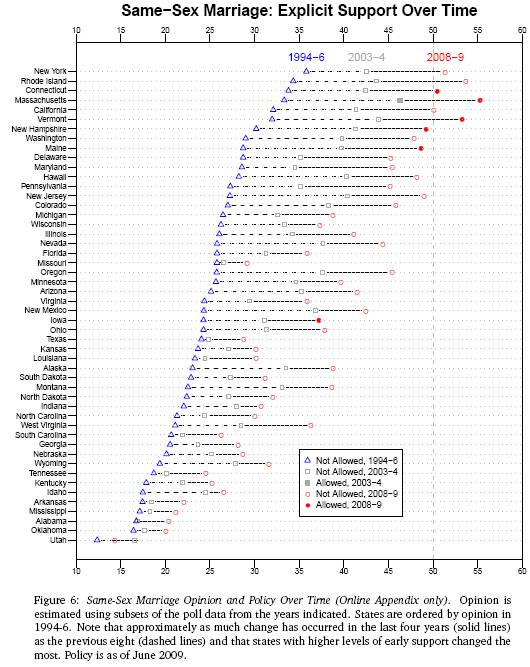 Similarly, here’s the picture of recent (2008) support for same-sex marriage by age group:

Barring a backlash even bigger than the one we’ve seen over the last ten years (during which support for same-sex marriage increased in every state except Utah), time is on the side of same-sex marriage. That may still be small consolation to elderly couples who have been together for decades.

82 thoughts on “Same-Sex Marriage and Time”