For a complete list of Beginners articles, see Financial Crisis for Beginners.

My post about French sociology got a wide range of comments, ranging from “Without a doubt, your best post yet” to “Reading this post made me think, for the first time, of ignoring Baseline Scenario from now on,” which I guess indicates we have a wide range of readers. In any case, for today I’m returning to something much more mundane: GDP growth rates. Like many Beginners articles, this one starts out with some basics, and then gets (a little) more interesting, but its main goal is to help you decipher the news that you already read.

To a casual reader, yesterday’s GDP announcement was that Gross Domestic Product (an aggregate measure of economic activity) fell by 6.1% or, more precisely, at an annual rate of 6.1%. What does this mean?

For those of you who have never visited the BEA website, this is what the raw numbers look like. (They give you  columns B and E, I calculated the rest.) Note that this is all in 2000 dollars, so inflation has been taken out. 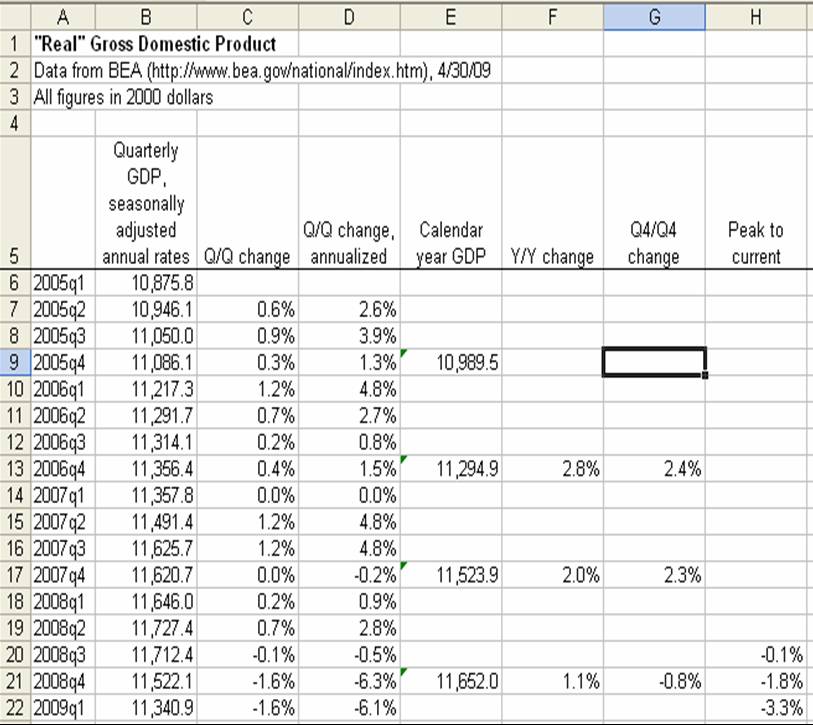 The columns are as follows:

GDP also, by definition, has four components: personal consumption expenditures; private domestic investment (investment by companies and households in big things, like factories or houses); net exports (exports minus imports); and government spending. You will also see growth rates (like above) for each of these components, and for their sub-components. You can see all the tables in the BEA’s nice news release. For example, in Q1 personal consumption grew at an annual rate of 2.2%, which was the “good” news, but private domestic investment fell at an annual rate of 51.8%, which was the “bad” news. (That 51.8% includes a preliminary wild guess at inventory changes – adding stuff to inventory counts as GDP, taking stuff out of inventory counts as negative GDP – but even excluding inventories, fixed investment fell at a 37.9% rate.) The aggregate GDP growth rates are just the weighted averages of the growth rates of the components.

Yesterday’s announcement was at the low (bad) end of most forecasts. The first thing to bear in mind, though, is that this is just the advance estimate. While advance estimates under ordinary circumstances are not that bad, the advance estimate for Q4 was way off. All of these numbers are estimates, and when the world changes, the estimating models become less accurate.

In some cases, a steep fall might mean that the recovery will just come that much sooner – if the floor is somehow independently determined. This could be the case with housing prices, for example, where there are reasons to believe that fundamentals will put a floor under prices, at least expressed as a percentage of average income. But the economy as a whole is a much more complex system, so I doubt you can take the level of the floor as given.

The principles above apply generally to the rates of change you see in the newspaper: you’ll see period-to-period changes, which may or may not be annualized, and year-to-year changes, which may compare entire years or a single period with the period one year before. But there are differences in presentation that can be confusing.

For example, the Consumer Price Index (technically, the CPI-U, which is the headline index) is reported on a monthly basis, and changes in the CPI are reported over three different periods:

(Of course, the figure that the Fed and many economists focus on is CPI with food and energy stripped out. For that measure, the three numbers are 0.2%, 2.2%, and 1.8%, which are much more in line with each other; remember, the first one is monthly and the others are annual.)

When you see housing price changes, like changes in the Case-Shiller index, you usually see changes from the previous month or changes from the same month a year before; which one you focus on can have a major impact on how you interpret the numbers.

For example, Calculated Risk today reported that the Restaurant Performance Index increased by 0.2% to 97.7 from February to March. However, as CR points out, “Any reading below 100 shows contraction. So the improvement in the index to 97.7 means the business is still contracting, but contracting at a slower pace.” In other words, activity was lower in March than in February. Is the increase in the index good news? Well, it’s better than a decline, and it’s better than staying the same. But indexes like this should have some degree of built-in reversion to the mean (around 100); things just can’t keep falling at a linear rate forever.

Finally, the Consumer Confidence Index of the Conference Board can be especially confusing. The index as a whole increased from 26.9 to 39.2 in April (the median over the last 20 years has been around 100, or a little below), driven largely by a jump in the Expectations Index (expectations about how the economy will be in six months) from 30.2 to 49.5. But the reading of 49.5, and the poll questions behind it, still indicate that many more people think the economy will get worse than think it will get better. So what we have is the economy getting worse, and even as it gets worse, most people think it will continue getting worse – but as time passes, a growing minority think that we are within six months of the bottom.

Hopefully that will help people interpret the numbers that make up so much of the economic news these days. As always, if you find mistakes, please let me know.