Apparently, both parties have platform planks calling for the reinstatement of the Glass-Steagall Act of 1933, the law that separated investment banking from commercial banking until it was finally repealed in 1999 (after being watered down by the Federal Reserve beginning in the late 1980s). Bringing back Glass-Steagall in some form would force megabanks like JPMorgan Chase, Citigroup, and Bank of America to split up; it would also force Goldman Sachs to get rid of the retail banking operations it started in a bid to get access to cheap deposits.

In his article discussing this possibility, Andrew Ross Sorkin of the Times slips in this:

“Whether reinstating the law is good idea or not, the short-term implications are decidedly negative: It would most likely mean a loss of jobs as part of a slowdown in lending from the biggest banks.”

I looked down to the next paragraph for the explanation, but he had already moved on to another unsubstantiated claim (that the U.S. banking industry would be at a competitive disadvantage). So, I thought, maybe it’s so obvious that Glass-Steagall would reduce lending that Sorkin didn’t think it was worth explaining. I thought about that for a while. I couldn’t see it.

END_OF_DOCUMENT_TOKEN_TO_BE_REPLACED

I think some people didn’t understand the point I was making about the question of whether the government made money on TARP in my earlier post. Summers said, “The government got back substantially more money than it invested.” This is true, at least if you give him some slack on the word “substantially.” The money repaid, including interest on preferred stock and sales of common stock, exceeded the money invested.

My point begins with the observation that, as of late last year, the government had earned an annual return of less than 0.5%. My point itself is that it is silly to evaluate an investment by whether or not it has a positive return in nominal terms. You can only meaningfully evaluate an investment by comparing it to some benchmark. Saying that a nominal return of 0.5% is greater than 0% is meaningless, since the 0% benchmark is meaningless. Most obviously, it doesn’t account for inflation; since inflation has been about 1–2%, the government lost money in real terms.

END_OF_DOCUMENT_TOKEN_TO_BE_REPLACED

Retirement Accounts for Everyone

The Connecticut legislature is considering a bill that create a publicly administered retirement plan that would be open to anyone who works at a company with more than five employees. Employees would, by default, be enrolled in the plan (at a contribution rate to be determined), but could choose to opt out. The money would be pooled in a trust, but each participant would have an individual account in that trust, and the rate of return on that account would be specified each December for the following year. Upon retirement, the account balance would by default be converted into an inflation-indexed annuity, although participants could request a lump-sum deferral.

The legislative session ends in less than two weeks, and while the bill has passed through committees, I believe it’s not certain whether it will be put to a floor vote. On Friday I wrote on op-ed for The Connecticut Mirror about the bill.

END_OF_DOCUMENT_TOKEN_TO_BE_REPLACED

The Cost of (Equity) Capital

For years, the world’s largest banks have been up in arms over threats by regulators to increase their (equity) capital requirements. Making banks hold more capital, they argue, will force them to reduce lending and will increase their cost of funding, making credit more expensive throughout the economy. One of the chief defenders of the megabanks has been Josef Ackermann, CEO of Deutsche Bank until last year and also chair of the Institute of International Finance, which claimed that higher capital requirements would reduce economic output by a whopping 3.2 percent.

Anat Admati and Martin Hellwig have been tirelessly debunking the myth that higher capital levels will force banks to curtail lending and torpedo the global economy, most recently in their excellent new book, The Banker’s New Clothes. Some of the arguments against higher capital requirements are simply incoherent, like the idea that banks would be forced to set aside capital instead of lending it. (Capital is the difference between assets and liabilities, not cash that you put somewhere for safekeeping; were it not for reserve requirements, which are something else, a bank could lend out 100 percent of the money it can raise.)

END_OF_DOCUMENT_TOKEN_TO_BE_REPLACED

Why Is Finance So Big? 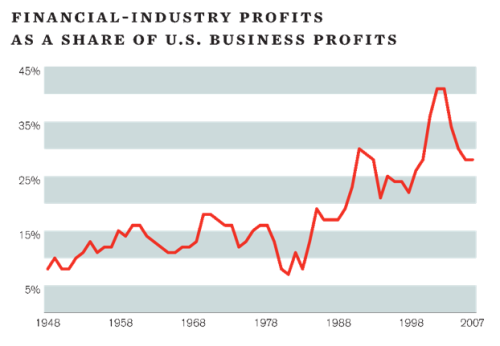 This is a chart from “The Quiet Coup,” an article that we wrote for The Atlantic three years ago next month. Many people have noted that the financial sector has been getting bigger over the past thirty years, whether you look at its share of GDP or of profits.

The common defense of the financial sector is that this is a good thing: if finance is becoming a larger part of the economy, that’s because the rest of the economy is demanding financial services, and hence growth in finance helps overall economic growth. But is that true?

END_OF_DOCUMENT_TOKEN_TO_BE_REPLACED

Finance and the Housing Bubble

Adam Levitin and Susan Wachter have written an excellent paper on the housing bubble with the somewhat immodest title, “Explaining the Housing Bubble” (which has been sitting in my inbox for a month). My main complaint with it is that it’s eighty-one pages long (single-spaced), which is most likely a function of law review traditions; had it been written for economics journals, it could have been one-third the length. I also have some quibbles with the seemingly obligatory paean to the importance of homeownership, which I think is an assumption that deserves to be contested. But overall it presents both a readable overview of the history and the issues, and a core argument I have a lot of sympathy for.

The argument is that the motive force behind the credit bubble was an oversupply of housing finance—in other words, the big, bad, banking industry. Levitin and Wachter’s key evidence is that the price of residential mortgage debt was falling in 2004-06 even as the volume of such debt was rising. As Brad DeLong’s parrot would say, that can only happen if the supply curve is shifting outward, not if the demand curve is shifting outward (which is what would happen if it were all the fault of greedy borrowers who wanted to flip houses).

END_OF_DOCUMENT_TOKEN_TO_BE_REPLACED

According to Calvin Trillin (or, more accurately, the probably-at-least-semi-fictional interlocutor he meets at a bar in Midtown), the financial crisis was caused by smart people going to work on Wall Street. In the old days, the story goes, it was the lower third of the class that went to Wall Street, and “by the standards that came later, they weren’t really greedy. They just wanted a nice house in Greenwich and maybe a sailboat. A lot of them were from families that had always been on Wall Street, so they were accustomed to nice houses in Greenwich. They didn’t feel the need to leverage the entire business so they could make the sort of money that easily supports the second oceangoing yacht.”

Then, however, as college debts and Wall Street pay grew in tandem, the smart kids started going to Wall Street to make the money, leading to derivatives and securitization, until finally: “When the smart guys started this business of securitizing things that didn’t even exist in the first place, who was running the firms they worked for? Our guys! The lower third of the class! Guys who didn’t have the foggiest notion of what a credit default swap was.”

END_OF_DOCUMENT_TOKEN_TO_BE_REPLACED

The Baseline Scenario
Blog at WordPress.com.