I feel like I should have something deep and original to say about Corey Robin’s fascinating article on nineteenth-century European culture, Nietzsche, and the economic philosophy of Friedrich Hayek. In addition to the things I’m better known for, I studied European intellectual history at Berkeley, with Martin Jay no less, and I’m pretty sure Nietzsche figured somewhat prominently in my orals. But Robin has far surpassed my understanding of Nietzsche, which is almost twenty years old, anyway.

The story, in very simplified form, goes like this. For Nietzsche, and for other cultural elitists of late-nineteenth-century Europe, both the rise of the bourgeoisie and the specter of the working class were bad things—the former for its mindless materialism, the latter  for its egalitarian ideals, which threatened to drown the exceptional man among the masses. One set of Nietzsche’s descendants was the political theorists like Carl Schmitt, who “imagined political artists of great novelty and originality forcing their way through or past the filtering constraints of everyday life.” Another, which Robin focuses on in this article, is the “Austrian” school of economics led by Friedrich Hayek.

END_OF_DOCUMENT_TOKEN_TO_BE_REPLACED

In the wake of their overwhelming defeat last week (at least relative to expectations a few months ago), Republicans are wondering how to improve their position in the next election. John Boehner has apparently told his caucus to “get in line” and support negotiations with the president over the “fiscal cliff” and the national debt. More shockingly, The Hill reported rumblings that Grover Norquist’s stranglehold over tax policy may be weakening, with one Democratic aide even saying, “As far as [Norquist’s] ability to sway votes, it’s gone.” Norquist’s Taxpayer Protection Pledge forbids lawmakers from voting for legislation that would either raise tax rates or increase tax revenues; if Republicans are questioning the pledge, that might pave the way for a bipartisan compromise to increase taxes.

Norquist’s response: “Nobody’s actually broken the pledge. That doesn’t keep me up at night.” He’s right not to worry. He has history on his side.

Let’s take a brief look at American political history since the 1970s, courtesy of the incomparable xkcd: 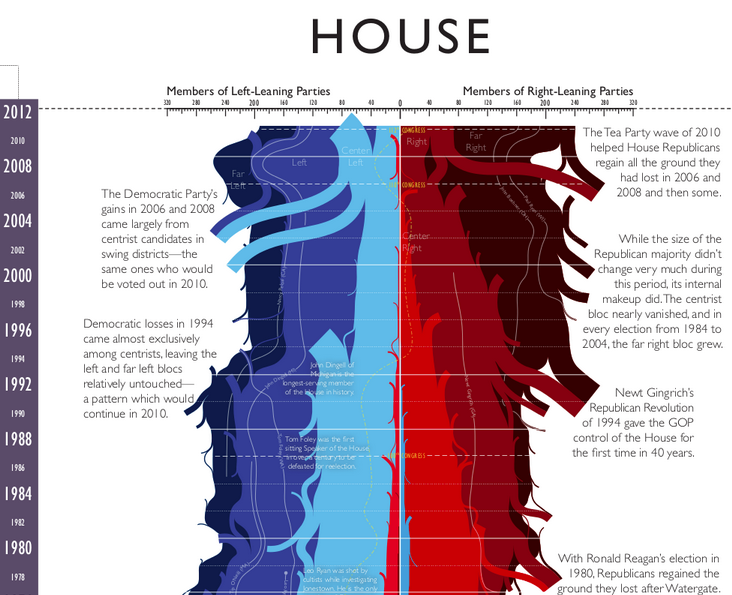 END_OF_DOCUMENT_TOKEN_TO_BE_REPLACED

I thought the description of the contemporary form of the perversity thesis (e.g., welfare programs create poverty) was especially good. “Here the failure of foresight of ordinary human actors is well-nigh total as their actions are shown to produce precisely the opposite of what was intended; the social scientists analyzing the perverse effect, on the other hand, experience a great feeling of superiority—and revel in it” (Belknap Press, 1991, p. 36). This seems to me an accurate description of why the Economics 101 ideology is so powerful. People get a sense of superiority from owning counter-intuitive theoretical insights—even if those insights are wrong.

END_OF_DOCUMENT_TOKEN_TO_BE_REPLACED

It has become a truism that modern American conservatism is revolutionary in the sense that it seeks to overturn the established order rather than to preserve it. “Reagan Revolution,” “Tea Party”—the very names for the movement announce that is about more than defending the status quo. In the conservative worldview, America (or “Washington,” or the “mainstream media,” or some other powerful stratum) is dominated by a liberal-intellectual-academic-bureaucratic-socialist-internationalist (pick two or more) elite that must be overthrown. So in at least a mythical sense, conservatism is about restoration, which is something very different from “conserving” what exists today.

When did this happen? According to one view of the world, to which I have been partial in the past, there was once an ideology called conservatism that really was conservative in the narrow sense: that is, it counseled maintaining existing institutions on the grounds that radical change was dangerous. The Rights of Man and the Citizen may be great, but soon enough you have the Committee of Public Safety and the guillotine. On this reading of history, conservatism became radical sometime after World War Two, when it gave up accommodation with the New Deal in favor of rolling the whole thing back, ideally all the way through the Sixteenth Amendment.

In The Reactionary Mind,* however, Corey Robin has a different take: conservatism, all the way back to Edmund Burke, has always been about counterrevolution, motivated by the success of left-wing radicals and consciously copying their tactics in an attempt to seize power back from them. Conservative thinkers were always conscious of the nature of modern politics, which required mobilization of the masses long before Nixon’s silent majority or contemporary Tea Party populism. The challenge is “to make privilege popular, to transform a tottering old regime into a dynamic, ideologically coherent movement of the masses” (p. 43). And the way to do that is to strengthen and defend privilege and hierarchy within all the sub-units of society (master over slave, husband over wife, employer over worker).

END_OF_DOCUMENT_TOKEN_TO_BE_REPLACED

(Actually, it was on Saturday.) I just read Invisible Hands: The Making of the Conservative Movement from the New Deal to Reagan (W.W. Norton, 2009), by Kim Phillips-Fein. It’s a history of the resistance from the business community to the New Deal and how it gave birth to at least one major strand of the modern conservative movement. One of Phillips-Fein’s major points is that the conservative movement is not just a reaction to the civil rights movement, the 1960s, and the women’s liberation movement (and Roe v. Wade). Those trends gave the conservative movement more energy and support, but business leaders had for decades been trying to build an intellectual and political movement that could reverse the New Deal. And while some of them talked about Christian values, what they really cared about were breaking unions and lower taxes.