Today’s installment of my new book, Take Back Our Party, evaluates the quarter-century reign of the Clinton-Obama axis over Democratic economic policy. (Chapter 1, if you missed it, is a historical account of the rise of the New Democrats and what they did once in power.)

The picture is not a pretty one, no matter how you look at it. This chart, for example, shows the distribution of economic growth across different groups in the income distribution:

(Data are from Piketty, Saez, and Zucman, of course.) There it looks like the bottom 50%—that’s half of the people in our country—have more or less broken even. But the true story is even worse: 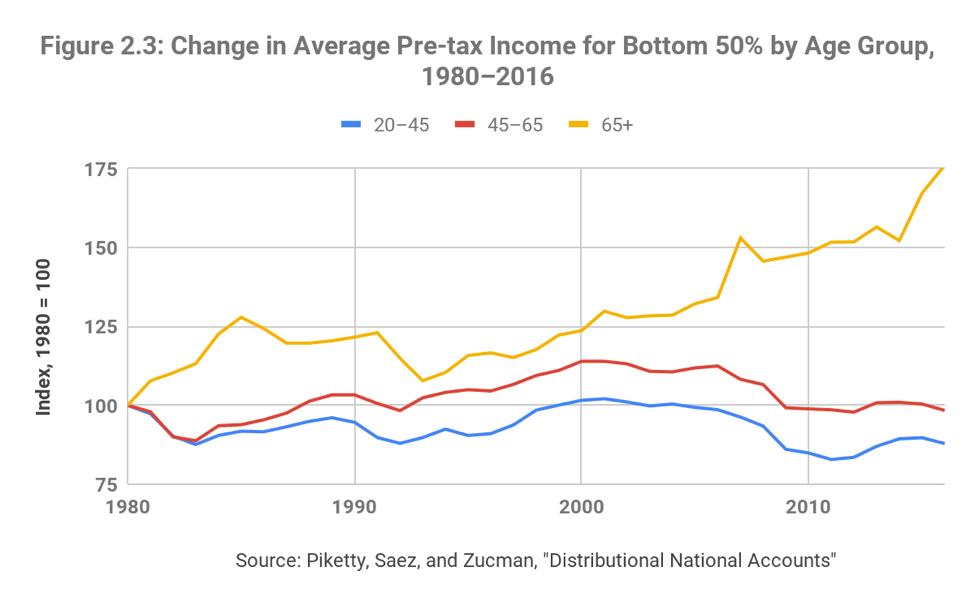 Among people in the bottom 50%, all of the income growth has gone to the elderly in the form of rising Social Security and pension payouts. Working-age people are doing worse than in 1980, and those below the age of 45 are doing much worse.

And this is not just the result of globalization and technology. Major Democratic policy choices including welfare reform, financial deregulation, and the abandonment of homeowners after the financial crisis all had the net effect of increasing inequality. The Affordable Care Act did some good in the short term—primarily by expanding Medicaid eligibility in most states—but has been powerless against the underlying problem of rising health care costs, which have resulted in higher deductibles and co-payments. That’s why even many families with health insurance cannot afford to get the health care they need.

Perhaps more important, the doctrine of “growth and opportunity”—the idea that government should focus on making the pie larger, and helping people gain access to the markets that would provide everything they need—continues to rationalize the Democratic Party’s failure to do anything about inequality itself:

“In the end, a Democratic Party traumatized by the Reagan Revolution and defined by its aversion to the words ‘socialist’ and even ‘liberal’ has proven powerless against the economic and political forces that have created this Second Gilded Age of monumental inequality. Flattered by its growing proximity with the economic elite and unwilling to do anything that might smack of class warfare, the party that was supposed to stand up for the working class instead took the side of markets and the overall economy, protesting that this was, in fact, the smarter, more sophisticated way to help all Americans. It wasn’t.”

They had their turn. They failed. It’s time for something new.

You can read the whole chapter here.

One thought on “Take Back Our Party, Chapter 2: Bad Policy”