This presidential election has come down to a referendum on Donald Trump, the whatever he is. Tactically speaking, that’s probably a good thing. Trump is an absolutely horrendous life form, and as long as he can’t get more than 43% of the vote, he almost certainly can’t be president. (Gary Johnson just isn’t that appealing.) Of course, focusing on personal attributes has been the Hillary Clinton strategy all along, even dating back to the primaries, when she focused on her experience and seriousness in the face of Sanders’s popular proposals (single payer, free college, etc.). It’s been even more true of the general election, in which Clinton has gone out of her way to portray Trump as a unique, rather than as the culmination of the evolution of the Republican Party.

Ordinarily we bemoan the focus on personalities rather than issues. (How many millions of times have Democrats complained about voters who chose George W. Bush because they would rather have a beer with him than Al Gore or John Kerry?) This time around, we seem happy enough with the personality contest, either because it increases Clinton’s chances of winning, or because Trump is so toxic that, this time, personality really does matter.

Still, there is a cost to the fixation on personal foibles and failings, even when they are relevant. The affair of Trump’s taxes is a perfect example. Trump’s taxes are relevant: his shifting, flimsy excuses for not releasing them show him to be a liar with something to hide; the $916 million loss illustrates the colossal failure of his real estate ventures in the early 1990s, and perhaps an aggressive approach to taking deductions for paper losses. From that point, however, the fact that he carried forward that loss to avoid paying federal income tax for years is no more his fault than Mitt Romney’s low average tax rate: it simply illustrates an existing problem with the tax code that Trump is well within his rights to exploit. (If you don’t like Mitt Romney, consider Warren Buffett, everyone’s favorite multi-billionaire: Buffett is a darling of the left because he favors higher tax rates on multi-millionaires, but in the meantime he pays the same low rate as Romney.)

The real problem with Trump, when it comes to taxes, is not what he pays or doesn’t pay, but how his tax plan would affect everyone’s tax burden. And there the numbers are not pretty. From the Tax Policy Center: 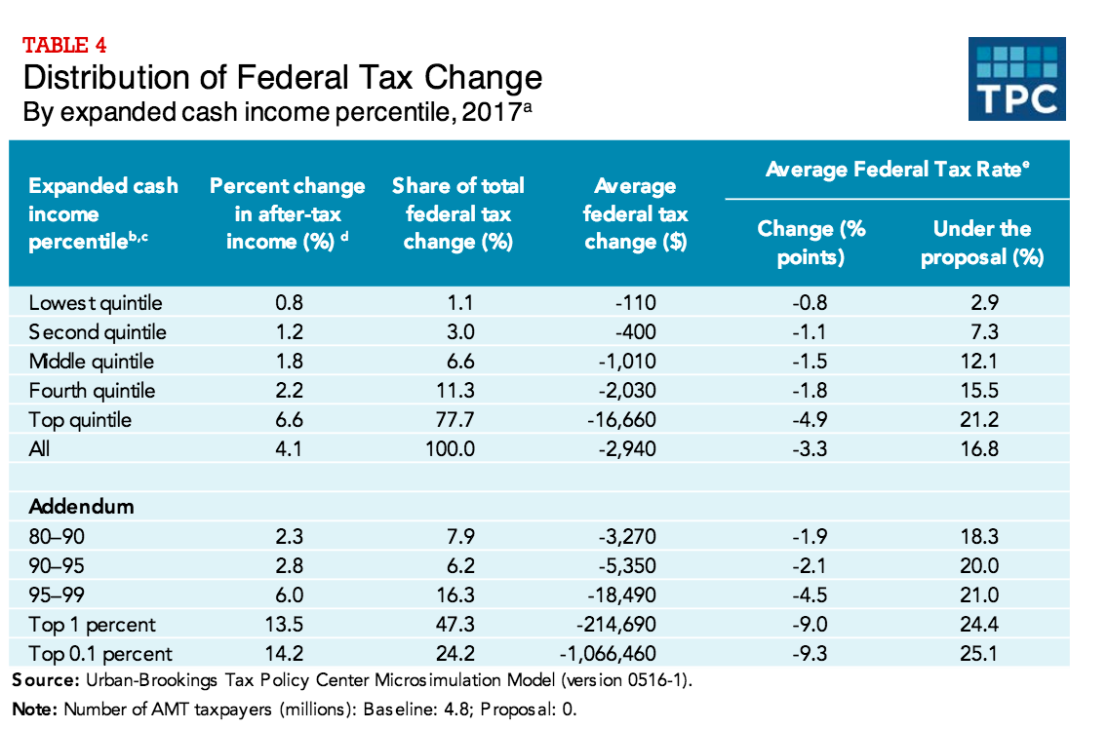 This is a classic, massive tax cut for the top 1%, similar to those proposed by Herman Cain, Marco Rubio, Ted Cruz, and every other Republican presidential candidate in recent memory. And this is on top of an existing tax code that already contains enormous loopholes for the ultra-rich. As I discuss in my latest Atlantic column, income tax is basically optional for the wealthiest families. (So is the estate tax, for the most part.) That’s the real problem we need to fix. Trump’s taxes will help Clinton get elected, which is a good thing. But the focus on Trump also distracts from the more serious problems with our tax code, which we really should should be talking about.

12 thoughts on “The Problem with Personality Contests”