Although the development of enterprise software is (often) highly sophisticated, sales is typically governed more by tribal custom. One trait we probably shared with other big ticket, business-focused industries is the “comp plan”: the system for calculating salespeople’s commissions on sales. The comp plan is just about the most important thing to any red-blooded salesperson. (Its only competition would be the territory assignment, which determines what companies he is allowed to sell to—or, more specifically, for sales to what companies he will earn a commission.) It is the source of months of lobbying, the subject of intense executive- and even board-level scrutiny, and the target of almost every complaint.

The typical comp plan—and most software companies conform pretty closely to the same model—is a weird animal, probably not what you would come up with were you designing it from scratch. Salespeople get a percentage of each sale, but that percentage rises with their cumulative sales: some relatively low percentage until they reach some predetermined “quota” (within the comp plan, the biggest source of resentment), then a higher percentage, and then much higher percentages as their sales increase beyond quota. Quota may be set for a quarter or for the year. The system is often engineered so that a salesperson who exactly reaches quota will be paid some predetermined “target total compensation” in the upper-middle class range; this means that the salesperson who doubles or triples his quota will make far, far more. (Top salespeople make more money than just about anyone else, except the CEO and maybe a few other executives.)

For whatever reason, the conventional wisdom is that salespeople are motivated entirely by their personal compensation—as opposed to most people in most other jobs, like the engineer who will work nights and weekends knowing that, at most, it will earn him a few extra percentage points in his next annual raise. This doesn’t have to be true, and I have certainly known many salespeople who cared deeply about the companies they worked for. But that assumption is what shapes the comp plan, which then tends to attract people who care only about their personal compensation.

The economist looking at this plan would immediately realize that this creates the incentive to time the closing of deals so that they fall in the period where they will result in the highest commission. All things being equal, it’s better to land four deals in one quarter than one each in four quarters. The salesperson looking at this plan realizes the same thing.

In a new paper, Ian Larkin (JSTOR; SSRN) analyzes the effects of this type of comp plan by looking at a proprietary dataset of close to 8,000 deals closed by a single software company. (About 1,100 per year, 412 total salespeople over a seven-year period, average deal size around $350,000, average discount over 30%—any guesses?) The effect on deal timing is striking: 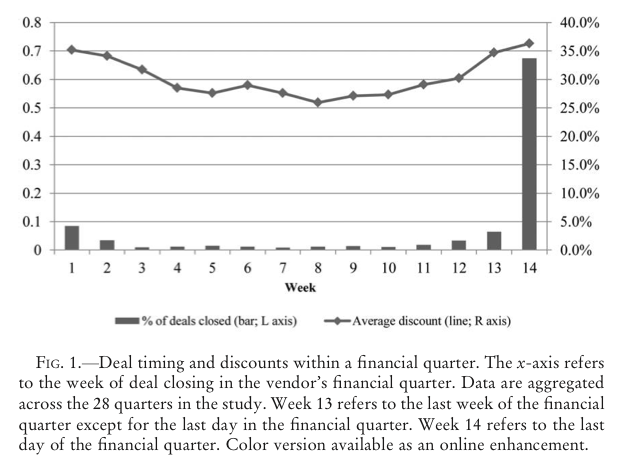 So is the effect on revenue. For each deal, Larkin calculates how much more or less the salesperson would have earned had it closed either one quarter before or one quarter later. He also estimates the increased discount that the salesperson gave in order to get the deal to close in the quarter that was best for him. (Note that discounts are highest at the beginning and end of the quarter; I don’t think I’m giving away an insider’s secret here.) The bottom line is that this software company lost about 6–8% of its revenue because of the timing incentives created by the comp plan.

Why do we do this? One possibility is that it may still be the rational thing to do. It’s possible that the comp plan causes salespeople to work harder, and that more than compensates for the timing problem. Another possibility that Larkin raises is that this type of plan is particularly attractive to overconfident salespeople and causes them to work harder than they rationally should (because they base their effort on the expectation of getting accelerators, even though the chances of them doing so are relatively low).

Still, it seems like you should be able to design something more rational. My guess is that the real problem would be selling a different plan to any kind of experienced salesforce, which would generally assume that you were trying to lower their pay. That is, the suspicion and discord (and attrition) it would generate would not be worth the higher level of efficiency. So it wouldn’t surprise me too much if, fifty years from now, the technology of the future is still sold the way IBM sold mainframes half a century ago.

4 thoughts on “The Cost of Comp Plans”