Mixed in with blogging about this, that, and the other thing, it’s nice to occasionally write on a topic I actually know something about. 401(k) plans and the law surrounding them were the subject of my first law review article (blog post). They have also been in the crosshairs of Ian Ayres (who simultaneously works on something like nineteen different topics) and Quinn Curtis, who have written two papers based on their empirical analysis of 401(k) plan investment choices. The first, which I discussed here, analyzed the losses that 401(k) plans—or, rather, their administrators and managers—impose on plan participants by inflicting high-cost mutual funds on them. The second, “Beyond Diversification: The Pervasive Problem of Excessive Fees and ‘Dominated Funds’ in 401(k) Plans,” discusses what we should do about this problem. To recap, the empirical results are eye-opening. 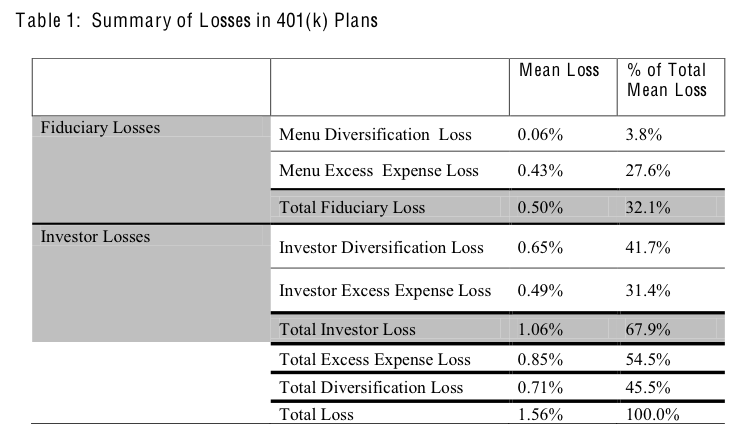 This table shows that 401(k) plan participants lose about 1.56 percentage points in risk-adjusted annual returns relative to the after-fee performance available from low-cost, well-diversified plans. The first line indicates that participants only lost 6 basis points because their employers failed to allow them to diversify their investments sufficiently. The big losses are in the other three categories:

Now you could say that the latter two sources of losses are the fault of individual plan participants, but that is cutting the employers (and the plan administrators they hire) too much slack. In particular, administrators should know that, if you offer both an S&P 500 index fund and an actively managed fund that closet-indexes the S&P 500 for 120 basis points more, some people will put their money in the latter.

The conclusion that Ayres and Curtis draw, which I also drew based on a different line of argument, is that many 401(k) plan fiduciaries—roughly speaking, employers and other parties with a management role in a 401(k) plan—are not meeting their legal obligations to protect the interests of plan participants. The key legal problem is the existence of the section 404(c) safe harbor, which exempts employers from liability for losses that are due to participants’ investment decisions. As currently interpreted by most courts, the safe harbor protects employers from liability for negligently constructing menus of investment options, so long as the resulting menu meets certain criteria met by the Department of Labor—criteria that allow plans to be stuffed with high-fee, actively managed mutual funds.

Ayres and Curtis argue that, although these legal standards could be modified, relying on participant lawsuits is a haphazard and at best partial solution to the problem. Instead, they propose a new regulatory scheme in which participants are defaulted into low-cost funds and must overcome some kind of barrier in order to switch into more expensive investment choices. In addition, participants would be allowed to roll their money out of 401(k) plans that do not offer low-cost investment options. This would be a vast improvement over the current system, to the tune of billions or even tens of billions of dollars a year.

There is a host of known problems with 401(k) plans as retirement savings vehicles. Ultimately, several of those problems stem from a faulty statutory and regulatory scheme—one that is based on a statute, ERISA, which was originally designed for defined benefit rather than defined contribution plans. Unfortunately, the current system has its ardent defenders—most notably the asset management industry, which likes the ability to charge high fees to captive customers, and the protection they receive from current judicial interpretations of the statute. Ordinary workers, as always, don’t have much of a lobby.