Back in the heady days of the financial crisis, I used to recommend Planet Money as a good way for non-specialists to learn about some of the basic economic and financial issues involved. Over the years, I’ve become less thrilled with the show, for reasons that will become obvious below. In particular, whenever Ira Glass dedicates a full This American Life episode to a Planet Money story, I cringe nervously, but I listen to it anyway, since, well, I’ve listened to just about every TAL episode ever, and I’m not about to stop now.

The worst part of the episode comes at the end, where Joffe-Walt claims that the Supplemental Security Income program, by paying benefits to poor families with disabled children, discourages children from doing well in school and from seeking work as adults, because either would cause them to lose their benefits. (“One mother told me her teenage son wanted to work, but she didn’t want him to get a job because if he did, the family would lose its disability check.”) On that topic, I’ll just outsource the rebuttal to Media Matters, citing the National Academy for Social Insurance and the Center for Budget and Policy Priorities, among others.

But the story as a whole suffers from the same kind of facile extrapolation from the individual story to national policy. The first half (on Hale County) winds up to the following punch line: There are lots and lots of people receiving disability benefits, and they receive lots and lots of money in aggregate, because there aren’t enough jobs where you can sit down. Or, rather, that’s Joffe-Walt’s conclusion from talking to people in Alabama: the reason they can’t even imagine working with back pain, and she can, is that they don’t see any jobs around where you can sit down.

Only then, as she pulls back the camera, the problem becomes the decline of American manufacturing, lost jobs, and newly unemployed factory workers without the skills they need to find new jobs. But which one is it? Is it too many jobs where people stand up (the problem in Hale County) or not enough (the decline of manufacturing)? Probably the latter: the story makes more sense as one where one set of jobs goes away, leaving people unable to get the jobs that are now available, and they turn to disability insurance instead. But that doesn’t explain Hale County, where there are no sit-down jobs.

Then there’s the weird way the whole episode treats welfare reform. “Ending welfare as we know it” comes up in a couple of places: first as a positive example of what we should be doing (moving people from passively receiving benefits to working), and later as a cause of the rise in disability claimants. On the latter point, Joffe-Walt cites the fact that federal welfare funding declined, shifting the burden to the states, which gave the states the incentive to push people off welfare and onto disability. True enough. But she overlooks the big story. Federal welfare reform set lifetime benefit limits, meaning that, after a few years, you get completely cut off. After some welfare recipients got jobs, this was the factor that ensured that welfare rolls would go down. Many people who couldn’t work and got welfare now can’t work and get disability. That’s a good thing—especially if the alternative is pushing them onto the streets.

Leaving all that aside, though, the story boils down to the idea that disability benefits are valuable, so people are trying to get them, framed as some sort of epiphany. “Holy cow, Batman, incentives matter!” But this is just social insurance 101. When designing programs that help poor and disadvantaged people, we already try not to reduce their incentives to work too much. That’s why programs phase out over income ranges, that’s why we have the Earned Income Tax Credit, that’s why we have a debate every time long-term unemployment benefits have to be reauthorized, and so on. Is this some sort of national scandal? No. There are people who are disabled and can’t work, they are entitled to a decent existence, the rest of us who can work should pay for it, and there is going to be a gray area where some people will be motivated to try to get into the program. That’s life.

And is the existence of disabled people some sort of huge new insight into the evolution of the American economy? Again, no. Joffe-Walt claims that the 14 million people receiving benefits outnumber the people who are unemployed and are completely invisible to economists. It’s true the newspapers don’t publish monthly disability figures like they do unemployment statistics. But look at this: 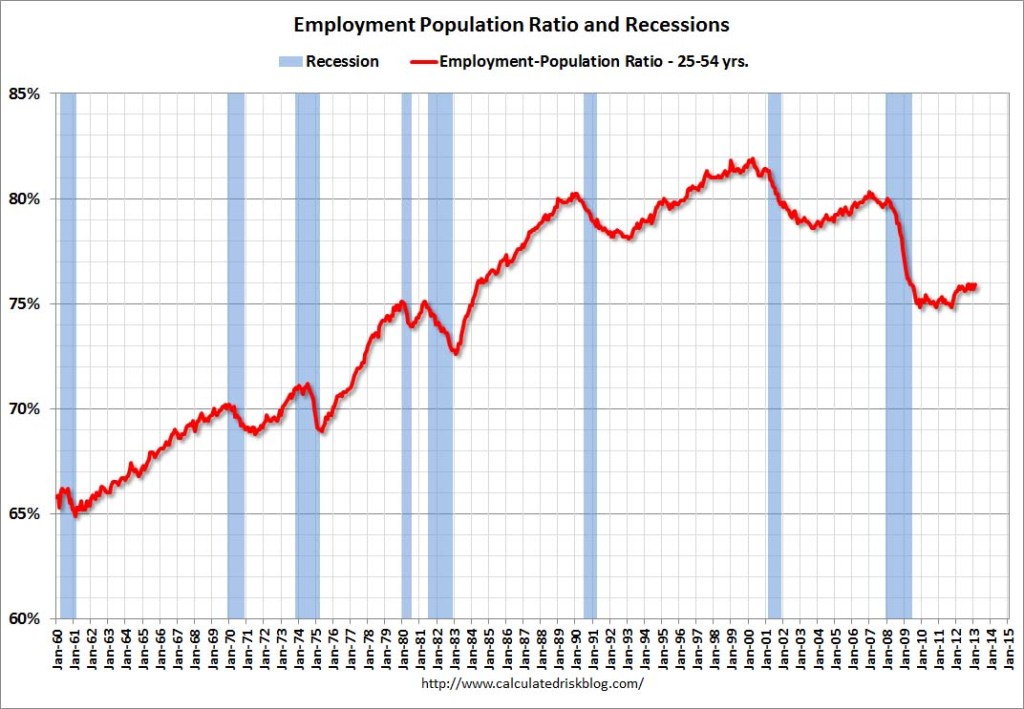 That’s the employment-to-population ratio, from the incredibly useful Calculated Risk. Since the denominator is all working-age people, this chart reflects any growth of disability recipients. And do you see some huge invisible force that is pushing down the employment ratio? I don’t think so. This chart tells the usual story we all know. The economy was very strong in the late 1990s, probably unsustainably so (with unemployment below the long-term sustainable rate, according to the macro guys). We had a recession, and then employment recovered to roughly the sustainable rate. Then we had the financial crisis and a huge fall in employment. Sure, a rise in disability rates could mean the employment-to-population ratio is lower than it otherwise would have been. But it’s not a new way of thinking about the economy. And if we’re getting better at diagnosing mental illness and providing benefits to people with mental illness, that’s a good thing.

I was going to end by trying to explain why I love This American Life and used to like Planet Money (see, for example, the episode where they talked to a chemist about why gold ends up becoming the basis for money in many developing societies) but don’t like episodes like this one. But Ira Glass is one of the savviest people in radio or any medium, so he can figure out what’s going on with the show he co-owns.