What was the budget debate about eleven years ago? 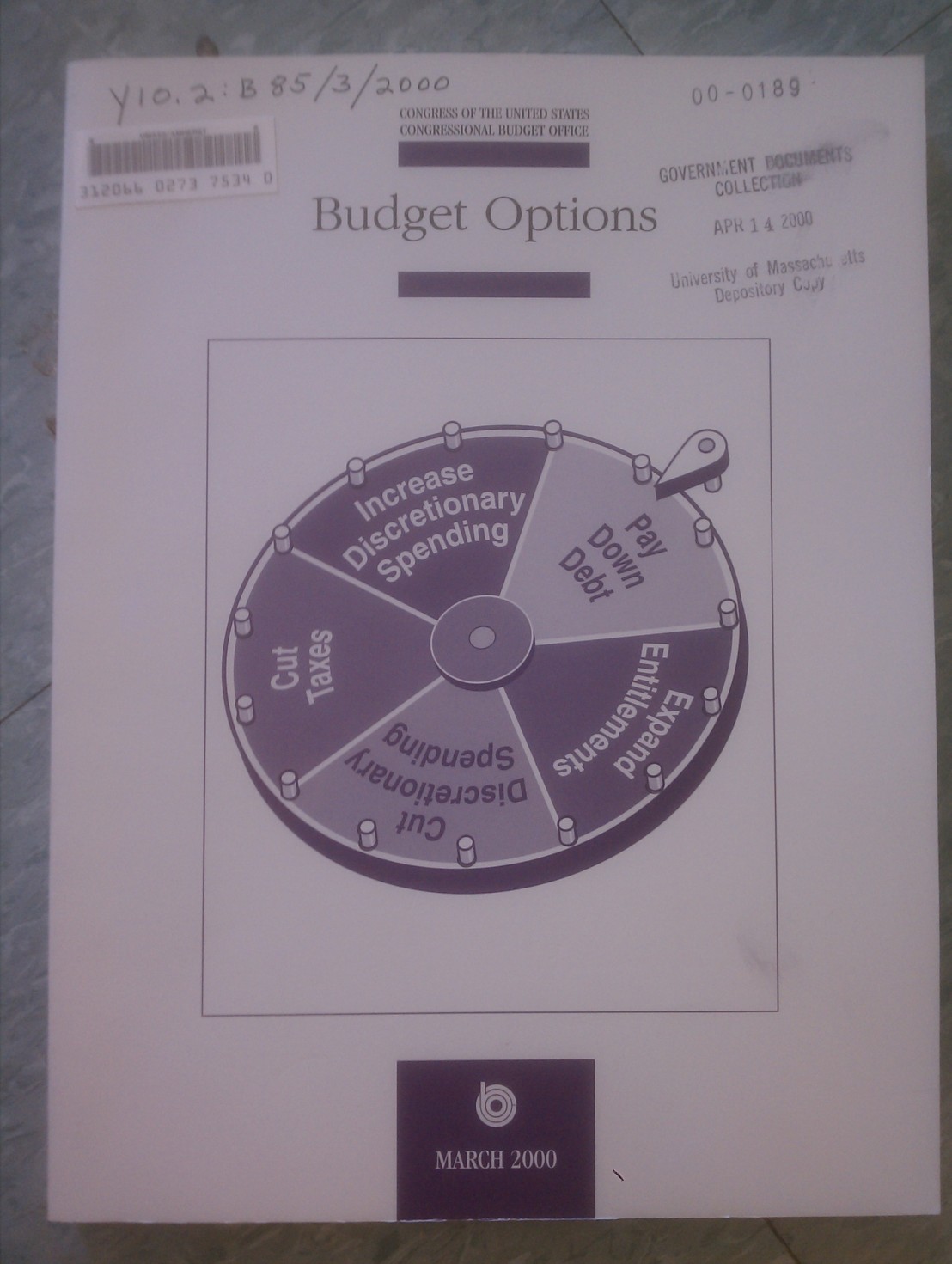 As you can see, that is the cover of the CBO’s March 2000 Budget Options report. (You can get it online, but without the cover.*) For most of the 1980s and 1990s, this report was called Reducing the Deficit: Spending and Revenue Options; this year’s version has reverted to that title.

The context for the picture above was the budget surpluses of the late 1990s. At the time, the CBO was projecting surpluses for at least the next twenty years, amounting to over $3 trillion in the first decade of the twenty-first century. (See the 2000 Budget and Economic Outlook, Summary Table 1.) And although most of the surpluses were off-budget (surpluses of Social Security payroll tax revenues over benefit payouts), there were supposed to be ten years of on-budget surpluses as well.

We all know what happened next: a (mild) recession, the Bush tax cuts of 2001 and 2003, the Afghanistan and Iraq Wars, and the Medicare prescription drug benefit, among other things. But the question for now is: did those surpluses really exist?

On an annual cash-flow basis, yes they did. The 2000 surplus was $236 billion, and only about $180 billion of that was due to the various Social Security and Medicare trust funds. (See Historical Tables 1.1 and 13.1 to the 2012 budget.) But on a long-term basis, the government very clearly had a budget gap. The CBO’s 1999 Long-Term Budget Outlook already had this now-familiar picture (p. 4): 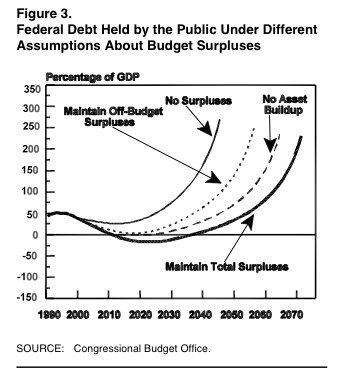 As you can see, even if the government saved all of its surpluses — no tax cuts, no additional spending, just save the money for the future — the national debt would shoot up in the 2060s. At the other extreme, if the government gave back the surpluses, either through tax cuts or additional spending (but still balanced the budget for the next decade), the debt would spike in the 2030s. And the reasons were already clear: demographics and health care costs. 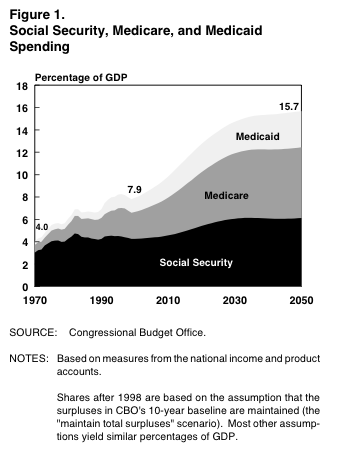 In other words, today’s long-term debt problems should not have been a surprise. And back in 2001 when the Bush tax cuts came up for a vote, every Congressperson should have known about these two pictures. That includes Senators Baucus, Feinstein, Kohl, Landrieu, and Nelson (Democrats), and Senators Blunt, Burr, Chambliss, Cochran, Collins, Crapo, DeMint, Ensign, Graham, Grassley, Hatch, Hutchison, Inhofe, Kirk, Kyl, Lugar, McConnell, Moran, Murkowski, Portman, Roberts, Sessions, Shelby, Snowe, Thune, Toomey, Vitter, and Wicker (Republicans), all of whom voted for the 2001 tax cuts (some of them as members of the House). (Sources here.) Senator Nelson and all of the Republicans (except Snowe and Thune) also voted for the 2003 tax cuts, too. Of course, John Boehner and Eric Cantor also voted for both tax cuts.

That doesn’t necessarily mean that the 2001 and 2003 tax cuts were necessarily bad policy (although I think they were). But it does mean that if these people are going to complain about the long-term deficit, they should admit to being part of the problem.

* Actually, you can now get CBO reports back to the 1970s online. The previous time I checked, the website only went back about ten years, which is why I went to the library for older versions.

12 thoughts on “Hoisted from the Archives”