Look, I’m familiar with the argument for the tax cut deal. It’s not a terrible argument. In simple form, it goes, the top priorities are to stimulate the economy and to cushion the impact of unemployment, and a two-year tax cut extension was worth it to get that, especially since we can kill the Bush tax cuts in 2012. Now, no one who wasn’t born yesterday buys that bit about killing the Bush tax cuts in 2012, but you could still make the argument that two years of stimulus is worth making the tax cuts effectively permanent. (I don’t agree, but it’s not a crazy argument.)

Basically he’s trying to convince you that Obama won: Republicans wanted the top-end tax cuts and Obama wanted the “middle-class” tax cuts, and Obama conceded the top-end tax cuts, but in exchange he won lots of other great things: unemployment insurance extension, some sweeteners to the earned income tax credit, American Opportunity tax credit (for college), some sweeteners to the child tax credit, lower payroll tax, and an extension of some business investment credits. Notice which column he put them in.

To call this framing disingenous would be kind. Republicans also wanted the “middle-class” tax cuts; they were the Bush tax cuts, after all, and I don’t recall any Republican saying we should only extend them for the very rich.

And if I try to imagine what it would be like to be a Republican, I’d have to say I probably like the extension of the investment tax credits (because they’re for business, and they’re LOWER TAXES); I probably like the American Opportunity credit (first because it’s not very progressive–you have to be going to college in the first place, and it only phases out above $160,000 for married filers–and second because it’s LOWER TAXES); and I probably like the payroll tax cut (first because it’s a tax cut that benefits everyone–the more you make, the more it benefits you, up to the cap–second because I like anything that hurts the funding for Social Security, and third because it’s LOWER TAXES). I’m probably neutral on the child tax credit; I like subsidizing families, and it is LOWER TAXES, but this one might be a little bit progressive. And I’m probably against expanding the EITC (because it feels like welfare to me), and I’m definitely against extending unemployment benefits (because I think they’re all deadbeats).

So I would reorganize this as follows:

I’d say Republicans got a pretty good deal, especially since, as Goolsbee says, everything in the second bullet is temporary, while many observers are thinking today that the third bullet is forever.

I just noticed, thanks to Ezra Klein, that Goolsbee’s argument, minus the crazy claim that tax cuts for the lower 98% were not something Republicans wanted, is the core of the White House’s marketing campaign: 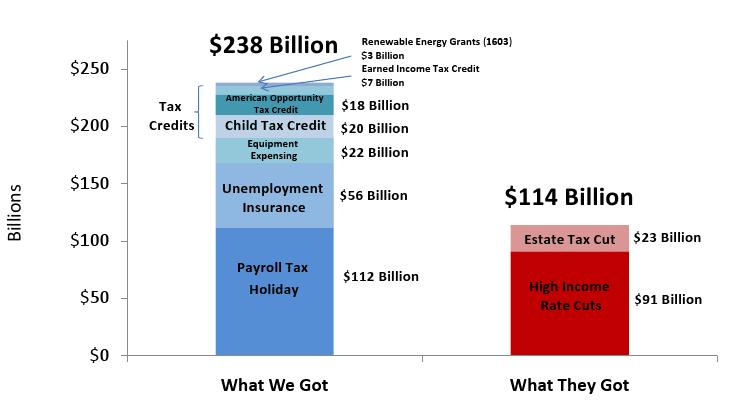 To which I make the same response as to Goolsbee’s video.

But let’s leave aside this “who won” question. I admit I don’t know what the Republicans want and don’t want. But I wouldn’t necessarily trust what they are saying, either. If you’re John Boehner, you want to pretend you don’t want things that you secretly want, so you can “concede” them in negotiations. And anything that lowers tax revenue is good for a fair number of Republicans. (In any case, this question turns largely on the question of whether or not Republicans are happy with the payroll tax cut. A lot of people have addressed that question already. Here’s Mike Konczal.) Finally, note that Mitch McConnell has said that the vast majority of Republicans will vote for the deal. That should tell you something.

There’s a bigger issue. If you watch the video, the flow goes like this: “We wanted these tax cuts. The Republicans wanted these other tax cuts, and they were holding our tax cuts hostage. But we won, because not only did we get our tax cuts and they got theirs, but we got all these other tax cuts!” Face it, the only thing on that board that isn’t a tax cut is extended unemployment benefits, although you can certainly make the argument that the EITC is more like a welfare program than a tax cut (and I’m certainly a fan of the EITC). The same goes for the chart.

So if you’re Grover Norquist and what you want more than anything else is lower tax revenue, you should be celebrating like it’s Christmas and your birthday at the same time. We had an argument where one side wanted tax cuts A, the other side wanted tax cuts B, and they compromised by adding tax cuts C? Here’s a great illustration from Klein, who despite the chart is still in favor of the deal:

And the Democratic argument–trying to get support from the base–is “we got more tax cuts than they did”?