“Housing Fades as a Means to Build Wealth, Analysts Say.” That’s the title of a New York Times article by David Streitfeld. Here’s most of the lead:

“Many real estate experts now believe that home ownership will never again yield rewards like those enjoyed in the second half of the 20th century, when houses not only provided shelter but also a plump nest egg.

“The wealth generated by housing in those decades, particularly on the coasts, did more than assure the owners a comfortable retirement. It powered the economy, paying for the education of children and grandchildren, keeping the cruise ships and golf courses full and the restaurants humming.

“More than likely, that era is gone for good.”

I’ve been telling my friends for a decade that housing is a bad investment. These are real housing prices over the past century, based on data collected by Robert Shiller: 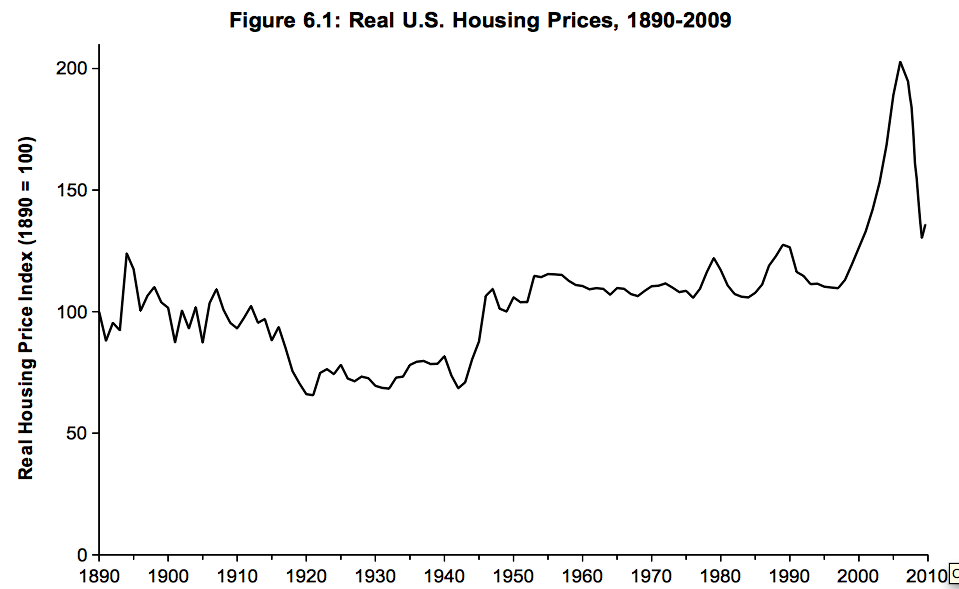 Housing is generally a worse investment than either stocks or simple U.S. Treasury bonds. Then why do so many people think it’s such a great investment?

OK, so now we all now the real story. Or do we? “In an annual survey conducted by the economists Robert J. Shiller and Karl E. Case, hundreds of new owners in four communities — Alameda County near San Francisco, Boston, Orange County south of Los Angeles, and Milwaukee — once again said they believed prices would rise about 10 percent a year for the next decade.” There’s that optimism bias.

But I don’t think it’s correct to say that an era is over–an era when housing appreciation was the key to the economy. The chart above shows simply that that era never existed; housing was flat for a long time, and then there was a bubble. Instead, we had the illusion of an era of housing appreciation, produced mainly by leverage and price illusion. For every homeowner who made a killing because she got a fixed-rate mortgage in 1970, there was a new family that couldn’t afford a house in 1980 because interest rates were too high, or a savings and loan that failed because it was weighed down by those fixed-rate mortgages. That whole phenomenon was just a transfer of wealth within society.

One last caveat, however. When “analysts say” one thing, they are usually wrong. Remember back in 1999-2000, when most analysts were saying that stocks were the best investment for everyone, all the time? Generally the best time to buy an asset class is when conventional wisdom has shifted against it. So while I still think housing is overpriced–and we should slowly remove the props on that price, like the mortgage interest tax deduction–maybe in the long term it’s not such a bad idea after all.

Update: An earlier version of this post had some incorrect calculations of the return on a hypothetical housing investment. Sorry–I’m out of practice at this blogging thing.

217 thoughts on “Housing in Ten Words”