Mike Konczal did some more great work earlier this week in two posts on the not-so-exciting topic of second liens. I don’t have much in the way of new insight or analysis to provide, so let me just summarize.

Konczal’s first point was that in the stress tests almost a year ago, the big four banks held $477 billion of second liens and estimated that these assets were worth 81-87 cents on the dollar, so they would take $68 billion in losses (under the “more adverse” scenario). Konczal estimated that they were instead worth 40-60 cents on the dollar, implying $191-286 billion in losses.

After Ryan Avent questioned whether second liens were really in such bad shape, Konczal came up with this great chart from Amherst Securities: 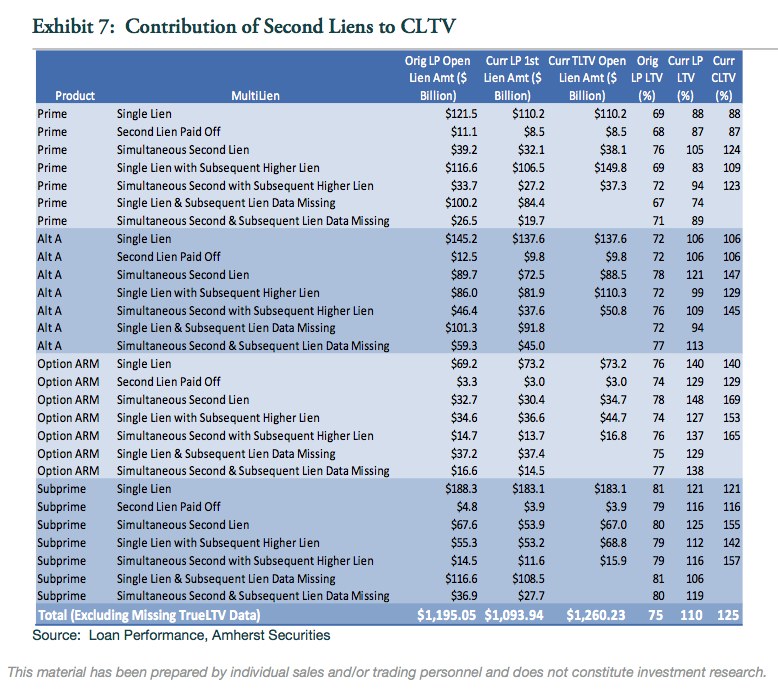 Here’s how to read it:

“The second to last column is the current loan-to-value, LTV, of the first lien. If it is greater than 100, it is underwater on the first mortgage by itself – the loan is greater than the value of the house. . . . The last column is the current CLTV, or combined-loan-to-value, which is the loan to value on all the debt of the property. . . . These are averages – the data sources aren’t more specific.”

So, for example, looking at the third line, the borrowers currently owe $32.1 billion on first liens and $6.0 billion on second liens. The LTV of the first mortgage is 105%, so the current value of the property is $30.6 billion. In other words, the first mortgages are underwater, so the second liens are more or less worthless. (In practice, the second liens do have some small value, based on three things: (1) the hope that some borrowers will continue to make payments on second liens, even though would do better (financially) to walk away; (2) option value, since housing prices could rise enough to make the second liens worth something; and (3) the possibility that the government will start paying off second lienholders to stop blocking short sales.)

So, looking down the chart, the problem seems obvious: the second liens are not worth very much, so the big banks are sitting on major unrealized losses. What’s more, these second lienholders are blocking the principal writedowns that would make sense if there were only one lender involved (a single lender would often rather lower the principal and keep the borrower in the house making payments than foreclose), because those writedowns would wipe them out; but they don’t want to foreclose, either, because that would also wipe them out. So instead we get “extend and pretend,” and possibly servicers pressuring borrowers to pay off their second liens before their first liens.

Now, John Cassidy doubles down on his defense of the stress tests in a blog post that responds to Konczal. Cassidy says:

Not surprisingly, I’m not very convinced. As for 1, a lot of this is probably people who are underwater but are still making payments–but might decide to stop. Some of it is probably people who got trial modifications on their first mortgages, so they can still make payments on their second liens. (The servicers who are in charge of those modifications are often the same bank that hold second mortgages.)

As for 2, this seems to directly contract Konczal’s data, which I would trust over “one official I spoke to.” Now, Konczal’s data are originally from LoanPerformance; I believe they get their data from securitizations, but I don’t know if that means that the second liens in their sample were securitized, or just that the first liens were securitized. (My guess is the latter.) It is likely that loans that went into securitizations were more toxic than those that didn’t. So if the banks in question are holding onto whole second liens where the primary mortgage was not securitized, then that could lean in Cassidy’s favor. (If on the other hand they are holding onto ABS based on second liens, then that would lean against.)

As for 3, what we care about is not the number of second liens that are underwater, but the dollar amount. If a HELOC is small and hence easy to pay off, by the same token it is relatively insignificant to the question at hand. More importantly, as Konczal says in a comment to his second post, citing Amherst Securities: “many borrowers are not paying their 2nd, but most of those are unpaid 2nds are home equity lines of credit. The unpaid interest is simply added to the balance, and the loan technically remains current.” So the default rate on HELOCs is artificially low.