Every major bank other than Goldman Sachs must be ecstatically happy that Goldman exists, soaking up all the attention with its escapades in Greece and Italy. The other banks, by contrast, are trying to make themselves out to be white knights. See, for example, JPMorgan’s ad today in multiple major print newspapers describing its commitment to small business lending:

The main claim is in the second paragraph: a commitment to lend $10 billion to small businesses in 2010. These kinds of marketing claims are difficult to verify. But I gave it a shot.

What does $10 billion mean? First let’s look at the history, thanks to those helpful supplements. 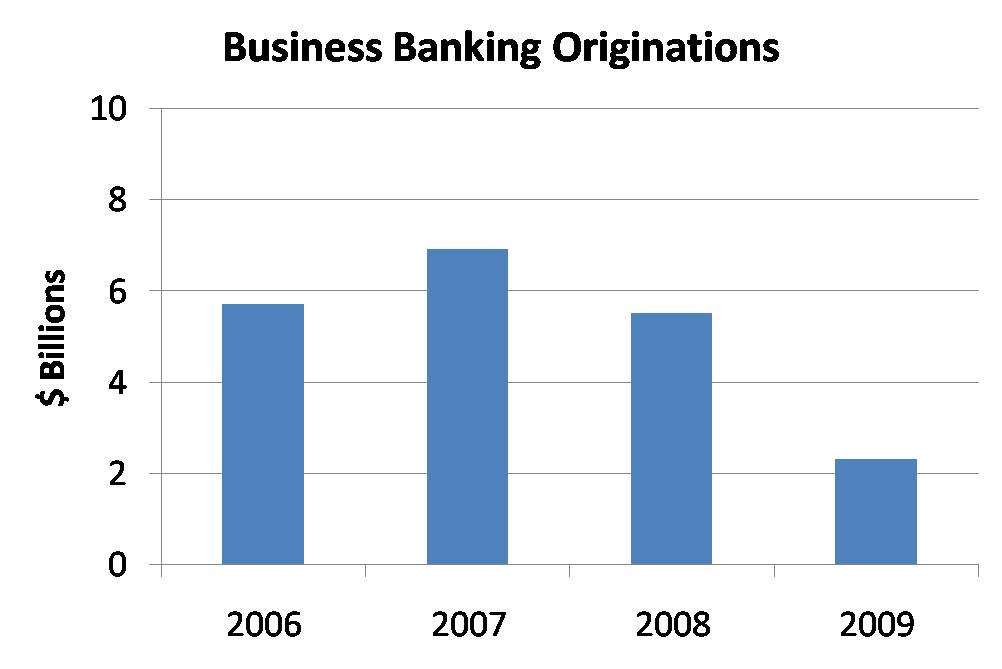 That’s called falling off a cliff. In words, JPMorgan Chase’s small business lending fell by two-thirds from 2007 to 2009. Or, in slow motion:

Note that the economic recovery began in Q3 2009 — no thanks to JPMorgan, apparently.

Still, $10 billion is still an increase over the previous high of $6.9 billion in 2007, right? Well, not quite. Because in the meantime, JPMorgan Chase went and bought Washington Mutual. At the end of 2007, Washington Mutual held over $47 billion in commercial loans of one sort or another (from a custom FDIC SDI report that you can build here). Most of those are not small business by JPMorgan’s definition, since commercial real estate and multifamily real estate got put into the Commercial Banking business after the acquisition. But that still leaves $7.5 billion in potential small business loans, up from $5.1 billion at the end of 2006, which means WaMu did at least $2.4 billion of new lending in 2007.

Finally, according to the ad itself, JPMorgan Chase has lent $800 million to small businesses in the first seven weeks of the year. At that rate, they’ll get to about $6 billion for the year. After the Washington Mutual acquisition. After the closure of close to two hundred smaller banks that were not considered too big to fail. That’s not something to run an ad about.