From Stacy Mitchell of the New Rules Project, also on the Huffington Post: 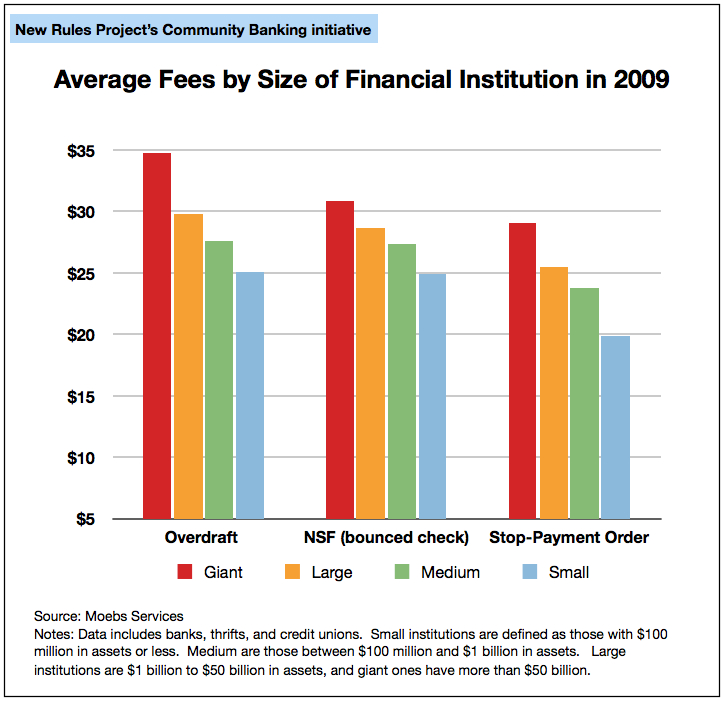 This is something I’ve long suspected based on anecdotal evidence. According to Mitchell, it’s nothing new:

“But rather than allow the evidence in favor of smaller banks to guide policy, Congress decided to get rid of the evidence. At the urging of then Fed chairman Alan Greenspan, Congress ordered the Federal Reserve to stop publishing its annual report on bank fees. . . .

“But, as it turns out, the firm that the Fed once employed to gather this data, Moebs Services, has continued to survey fees at more than 2,000 financial institutions. Moebs agreed to share its 2009 data with the New Rules Project. As our charts show, the biggest banks still impose much higher costs on their customers than small financial institutions do.

“Not only are fees lower, but several studies have found that smaller banks and credit unions pay higher interest on savings accounts. In a study published by the Federal Reserve Bank of Cleveland, researchers Kwangwoo Park and George Pennacchi examined data from 1998 to 2004 and found that rates on one-year CDs were an average of 14 percent higher at small banks (under $1 billion in assets) than at large ones (assets of $10 billion or more) and rates on interest-bearing savings accounts were 49 percent higher.”

The article discusses some reasons why consumers continue to pay more in fees and get less interest on deposits. I think it’s a combination of better marketing by big banks, a general lack of comparison shopping, and low fee transparency. (Price competition often bigs and ends at the words “free checking.”) Big banks are also somewhat stickier because they can cross-sell more products, which makes them harder to leave. But it can be done.