Here’s a letter submitted by a reader, originally from Chase, encouraging her to keep overdraft protection on her checking account. 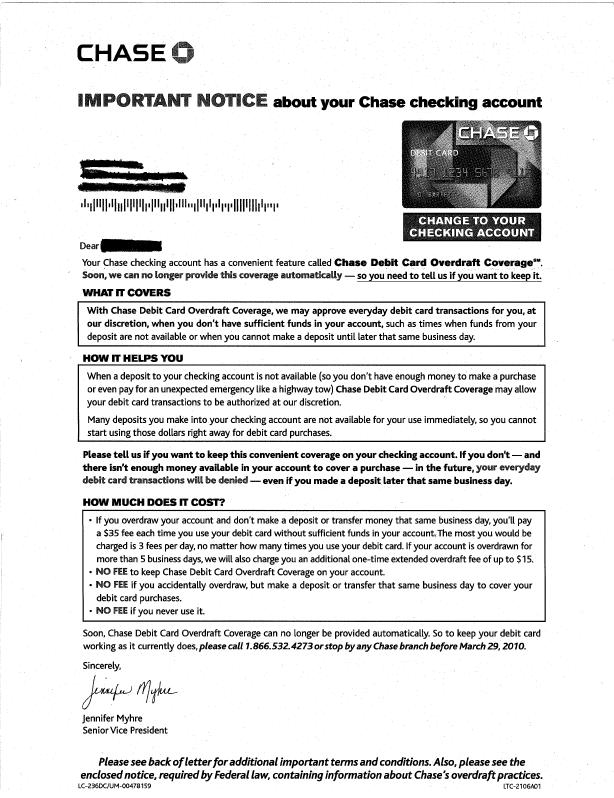 There’s nothing particularly evil about this — banks will no longer be allowed to charge overdraft fees without your consent, and even I will concede that there are some people who might want this service, so now they have to ask for permission. Of course, it’s a pretty hard and misleading sell: they focus primarily on the issue of funds availability (deposits may not be available immediately), and they try to frighten you with “an unexpected emergency like a highway tow.” If you do get a letter like this and are not sure what it means, remember that the bank will not tell you when you are about to overdraw your account, and it will charge you $34 each time, even multiple times per day, no matter how small the overdraft.

Of course, what banks really should do if they care about customers is come up with a way to give you a choice at the moment of purchase. Most people probably have a credit card or cash they would switch to if their checking account can’t cover their purchase, but some people might want the choice. In an ordinary competitive market, one bank would come up with such a service* and use it to take customers away from its competitors. We’ll see if that happens.

* Some people might object that this is a network issue that individual banks can’t solve. But I doubt that a little bit of creativity could not solve the problem. There must be a way for the bank to send a message back to the POS device — that’s how they reject transactions. They just need a way to get a tiny bit more information into that message, to the effect of “this transaction would overdraw your account — swipe again if you really want to do that.”