With the submission of the Obama administration’s budget today, fiscal silly season is opening. President Obama already launched an opening salvo last week with his proposed freeze on non-security-related military spending,which amounts to a rounding error on the ten-year budget projections, which are themselves a rounding error on the long-term budget projections– at a time when unemployment is running at 10.0%. Fortunately, there is a partial saving grace, which is that the freeze does not set until until fiscal year 2011 (which begins in October 2010), and in the meantime Obama has proposed $100 billion in tax cuts and government spending to create jobs. (Whether his proposals are the right way to spend $100 billion is a debate for another time.)

The midterm elections are looming already (note: do we have to be satisfied with a political system in which the legislature is preoccupied with upcoming elections half the time?), and the two big themes seem to be jobs and the deficit. With unemployment at levels not seen since the 1980s, it’s obvious why jobs are on the political agenda. With the federal budget deficit at record (nominal) levels, it also seems obvious that the deficit should be on the agenda, but this is really an unfortunate artifact of our political system. A government deficit is the result of insufficient government saving, and a period of high unemployment is absolutely the worst time to increase government saving. The sensible solution would be to use the urgency we currently feel to put in place long-term fiscal solutions, but the political system can’t handle that (see health care reform as Exhibit A). As a result, when deficits go up, we get lots of short-term politicking about the deficit–in Paul Krugman’s words, the “march of the deficit peacocks.”

On these two themes, the Democrats’ message is that (a) they are fixing the economy (growth is back, they are doing something about jobs) and (b) they are serious about the deficit (bank tax, three-year freeze, health care reform, etc.). The Republicans’ message is that (a) the Democrats have failed to fix the economy (unemployment is still high) and (b) the deficit is the Democrats’ fault due to runaway government spending. While I have been extremely critical of the Obama administration for its generous policies toward large banks, which I believe have increased the risks facing the financial system in the future, otherwise they have taken directionally the right steps as far as jobs are concerned. And when it comes to long-term deficits, the Senate health care reform bill–whose cost-cutting measures are based largely on proposals from the administration, particularly Peter Orszag–is perhaps the biggest deficit-reduction bill of all time.

The Republicans, by contrast, are using their status as the party out of power to spout all sorts of nonsense when it comes to the deficit. Representative Paul Ryan was quoted by the New York Times calling the budget “nothing more than a plan for more of the same — a very aggressive agenda of more government spending, more taxes, more deficits and more debt — with just a few cosmetic budget maneuvers to give the illusion of restraint.” To begin with, I can give him a pass for redundancy (“more deficits and more debt”), but complaining about “more taxes” and “more deficits” in the same sentence? Does Paul Ryan not know how a deficit is measured, or does he not know where government revenues come from? Logically speaking, it must be one or the other.

Speaking of taxes, how did we get into this deficit mess in the first place?

You’ve no doubt seen this chart from the Center on Budget and Policy Priorities or something similar before, but that doesn’t make it any less true. And what is it in the president’s proposed budget that the Republicans are aiming at? The plan to let the Bush tax cuts lapse for people making more than $250,000 per year. In other words, the problem with the Obama budget is that the deficits are too high, and the solution is to cut taxes. Huh?

None of this is new, of course. Sam Stein pointed out the same issues in December. Yet since Ronald Reagan, a large proportion of the electorate has become wired to believe that deficits are always the product of excess government spending, so the facts bear repeating.

The fiscal situation is actually very simple. The budget was in surplus when President Clinton left office, although there was already the prospect of budget-busting Medicare deficits in the long-term future. The 2001 and 2003 Bush tax cuts and the unfunded Medicare prescription drug benefit created the large deficits of the Bush era. (The Iraq and Afghanistan wars didn’t help, but it’s not fair to blame those entirely on the Republicans; plenty of Democrats went along.) Then the financial crisis and the resulting recession blew a huge hole in government tax revenues, creating the current spike in deficits; that spike was exacerbated by the stimulus package, which most but not all economists would consider a sensible response to a major recession. (According to an earlier analysis by David Leonhardt, the projected average fiscal balance for the years 2009-2012 has changed, since Clinton left office, from an $846 surplus to a $1,215 billion deficit. The biggest lumps are $673 billion in Bush administration policies and $664 billion in the costs of the financial crisis and recession, including bailout costs.)

Yet somehow the Republicans have tried–successfully!–to spin our current and projected deficits as the result of “more government spending,” putting the Democrats on the defensive. And unfortunately, the result is the Obama administration buying into the Republican attack line–that government spending must be reduced. How else to explain the three-year spending freeze, which is mainly symbolic and a little bit destructive? The bipartisan commission to reduce the deficit has a little more to recommend it, although I’m skeptical that it will achieve anything. The Republican position seems to be that the deficit commission is bad because–wait for it–it might increase taxes. Here’s what the Wall Street Journal has to say:

“Republican leaders are under pressure from conservatives not to cooperate, due to concerns that the commission would recommend tax increases.

“‘Look, I don’t think anybody in the country thinks we have a problem because we tax too little, I think the problem is we spend too much,’ Senate Minority Leader Mitch McConnell (R., Ky.) said on CNN’s ‘State of the Union’ on Sunday. ‘So, I like the commission idea, just as I said a few months ago. I think a better way to do it is target spending.’

“Deficit hawks in both parties say the commission must be able to look at spending and revenue to make a dent in the deficit in the near term. But politically, its members could be boxed in. Not only are Republicans opposing tax increases, but they are also attacking Democrats for proposing cuts to Medicare.”

So, let’s recap. The medium-term deficit problem was created by Bush tax cuts and by an unfunded Bush-era expansion of Medicare. The long-term deficit problem is all about Medicare. Yet the only solution that Republicans can think of is reducing spending–but not Medicare spending. Of course, this shouldn’t surprise us; Mitch McConnell gave us this, after all:* 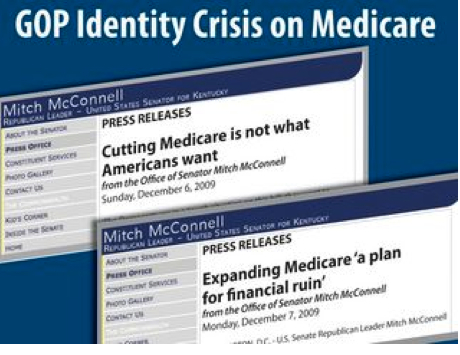 But apparently the sharp political minds in the Obama administration have decided that this is the turf they have to fight on. Now it seems that instead of going back to Bill Clinton in 1995-1996, they are reaching all the way back to 1993, when Clinton, Rubin, et al. decided to kill the deficit monster first and worry about helping the poor and the middle class later. They did kill the deficit monster (OK, they just knocked it out for a decade), but then they lost Congress in 1994 and never got around to helping the poor and the middle class; by the time we got a president and Congress who might have tried, it became time to kill the deficit monster again.

The real solution to the deficit problem must fix the long-term Medicare problem. That means some combination of reducing the long-term cost of health care (which the administration tried mightily to do, so far unsuccessfully) and increasing funding (taxes). The idea that we can just spend less money on health care costs as health care costs increase (and with about 47 million Americans already uninsured) is patently ridiculous–unless your goal is simply to let low- and middle-income seniors die. So the only important question is how to reduce Medicare spending or increase Medicare revenues. But with an opposition party ready to roll out its artillery at any mention of either Medicare cuts or tax increases, it’s hard to see where a solution can come from.

* The image is from congressional Democrats, but the press releases were really issued by McConnell.

42 thoughts on “Budget Sense and Nonsense”