As you may have noticed by now, Wikipedia’s English-language site is (mostly) down for the day to protest SOPA and PIPA, two draconian anti-copyright infringement laws moving through Congress, and Google’s home page looks like this: 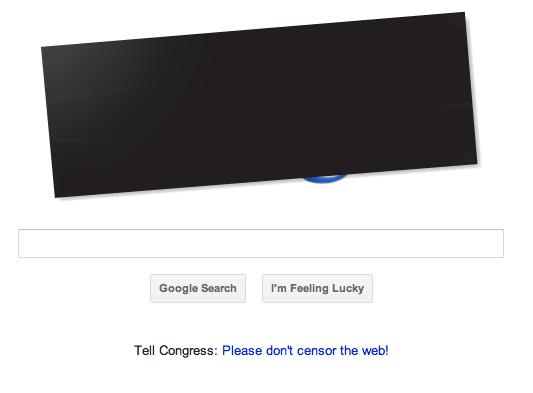 Under existing law (the DMCA), if someone posts copyrighted material in a comment on this blog, the copyright holder is supposed to send me a takedown notice, after which point I am supposed to take the material down (if it is in fact copyrighted).

SOPA and PIPA are bills in the House and Senate, respectively, that make it much easier for “copyright holders” (like the big media companies that back the bill—or, come to think of it, authors like me) to take action not only against “bad” web sites that make copyrighted material available (against the wishes of the copyright holders), but also against web sites that simply link to such “bad” web sites. For example, the copyright holder can require payment network providers (PayPal, credit card networks) to block payments to such web sites (in either category above) and can require search engines to stop providing advertising for such web sites—simply by sending them a letter. That’s SOPA § 103(b).*

Another controversial provision is the one in § 102 that allows the Justice Department to order domain name servers to stop translating URLs (like “www.google.com”) into the IP addresses that actually point your browser to the web sites you want to go to—essentially without due process. This has been described by some as tantamount to “breaking the Internet” because it would break the integrity of the domain name system that keeps the Internet organized. (For overviews of the bills, see Brad Plumer and the EFF; for the case that it violates the First Amendment, see Mike Masnick, who quotes extensively from and links to Lawrence Tribe’s argument).

Naturally, I was wondering how the bill would affect me. Many people think it would impose a requirement that web sites police not only the content they produce themselves, but the content contributed by visitors (e.g., blog comments), and all the content on all the sites they link to (including links in blog comments). I think this is based on § 103(a)(1)(B)(ii)(I) (don’t you love bill numbering?), which puts your site in the wrong if it “is taking, or has taken, deliberate actions to avoid confirming a high probability of the use of the U.S.-directed site to carry out acts that constitute a violation of section 501 or 1201 of title 17, United States Code.” What does it mean to take actions to avoid confirming a high probability that someone is using your site to link to copyrighted material?

Now, § 103 only allows copyright holders to cut you off from payment networks and advertising, and since we don’t do either one here, I don’t think it would mean the end of The Baseline Scenario. But it could mean the end of every commercial blog, or at least the end of comments on any commercial blog that doesn’t have the staff to police comments and sites linked to in comments. And if it passes, I will at least turn off comments until I can get an opinion from a real IP lawyer whom I trust.

So if you like the Internet the way it is, tell your representatives that you oppose SOPA and PIPA, via the EFF, Google, or Wikipedia. Thanks.

(I know it’s been a slow start to the year on the blog. I had a wedding to go to out of the country and an intensive week of edits on an upcoming book. Things should return to normal slowly.)

* Section 103, in bipartisan Orwellian fashion, is entitled “MARKET-BASED SYSTEM TO PROTECT U.S. CUSTOMERS AND PREVENT U.S. FUNDING OF SITES DEDICATED TO THEFT OF U.S. PROPERTY.” What’s market-based about a system that allows one party to cut off the revenues of another party simply by sending a letter to PayPal, MasterCard, Visa, and American Express?