In the same post I discussed yesterday, Keith Hennessey cites the same NHTSA report – the Final Rule governing CAFE standards for model years 2011-15, issued in January 2008 – to make this point: “The proposal will have a trivial effect on global climate change.” (It’s point 5 in his post, and was also picked up by Alex Tabarrok in his endorsement.) Hennessey cites the NHTSA report accurately, but the report itself is misleading.

What does the report say? Look at Table VII-12 on page 624. There are three scenarios that we are concerned with: No Action (which Hennessey calls, and I will call, “Baseline”); Optimized (“Bush Plan”); and Total Costs Equal Total Benefits (“Obama Plan”). If you want to know why Optimized is Bush and TC = TB is Obama, see my previous post. In the year 2100, the projected carbon dioxide (“CO2”) concentration in the atmosphere, in parts per million, is:

That’s pretty convincing – or is it?

To answer that question, we’ll have to look at the report that those numbers are drawn from: the enormous Final Environmental Impact Statement, whose summary is here. You can see that the two documents tie by looking at Table S-9 on page 14 of the FEIS, which matches the table in the report Hennessey cites.

So the greenhouse gas source targeted by CAFE accounted for 2.4% of global emissions from all sources. If we’re going to look at a 2100 projection, though, we have to take into account the fact that that percentage is certain to go down over the century as countries like China and India become more developed under any scenario. I’m going to guess that by 2100, even in the baseline, U.S. cars and light trucks would fall to 1.6% of global GHG emissions; that means that on average, over the century, they would be producing 2% of global emissions.

Obviously, if all we do is reduce emissions from one source that accounts for 2% of the total, we’re not going to have a noticeable impact on global warming. If we want to know if we’re doing “enough” in this one little area, the right question to ask is: if we were able to reduce emissions from all sources by the proportion that we are able to reduce U.S. car and light truck emissions, would that have an impact? To answer that question, we have to multiply the impact of the CAFE standards by 50. Then the numbers look like this:

Second, however, the much more misleading part of this report is its assumptions about what happens after 2020.

To begin with, we have to understand what the various scenarios are. It’s not clearly spelled out, but the Summary implies that the baseline scenario is one in which the 2010 CAFE standards are extended to cover the 2011-15 period; see for example footnote 13 on page 13. Most of the other scenarios estimate what would happen with different CAFE standards for model years 2011-15. The important point is that they only measure the impact on model years 2011-15. Relative to the baseline, they don’t even assume that higher standards in 2015 will lead to higher scenarios in later years; they assume that after 2015, CAFE standards revert to the baseline. For example, see footnote 10 on page 8:

NHTSA uses 2060 as the end point for the analysis [of fuel consumption] because it is the time at which 98 percent or more of the operating fleet would be made up of MY 2011-2015 or newer vehicles, thus achieving the maximum fuel savings under this rule.

(Footnote 11 on page 11 says essentially the same thing, in the context of toxic air pollutants.) You see? They are assuming that higher standards for MY 2011-15 will have no effect on standards in later years.

This is absurd. Even if NHTSA never wrote another CAFE standard for any year after 2015, the fact that, under either the Bush or Obama plan, CAFE would be higher in 2015 than in the baseline implies that fuel efficiency will remain higher than in the baseline for some time to come, if not forever.

For greenhouse gases, however, the analysis is not quite so ridiculous. To see the assumptions, however, we have to leave the summary and go to the Cumulative Impacts section. There, at the bottom of page 53, we see this:

This is still absurd, though slightly less so than assuming that fuel efficiency gets worse in 2016.

Graphically, the report is estimating the impact of the alternative scenario (Bush or Obama) versus the baseline like this: 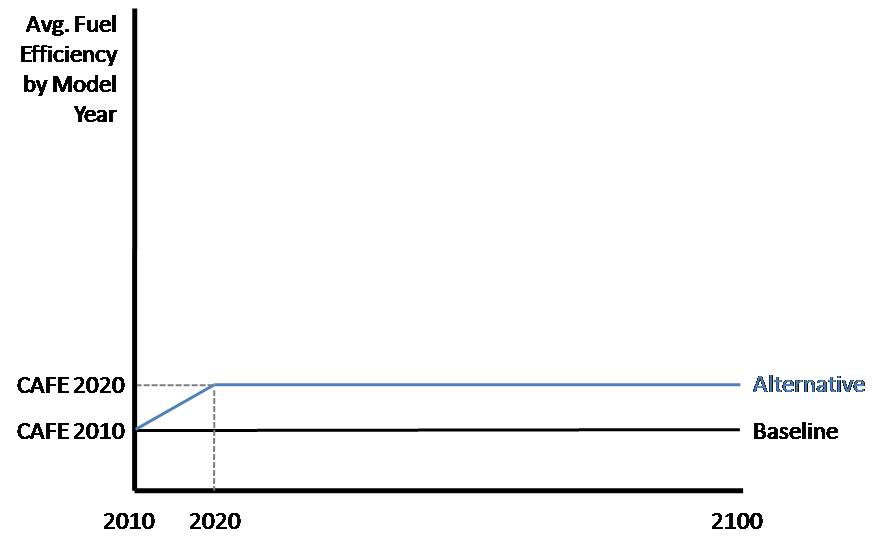 Obviously, it’s true that if you improve fuel efficiency for 10 years, and THEN YOU STOP, you are not going to have a large impact. The point is to continue improving fuel efficiency. And you cannot simply choose your fuel efficiency independently in each year; the achievable CAFE standards for 2021 depend heavily on what the actual standards are for 2020. Put another way, the policy objective is to get on a long-term improvement trajectory that will get us where we need to be, as in the following picture: 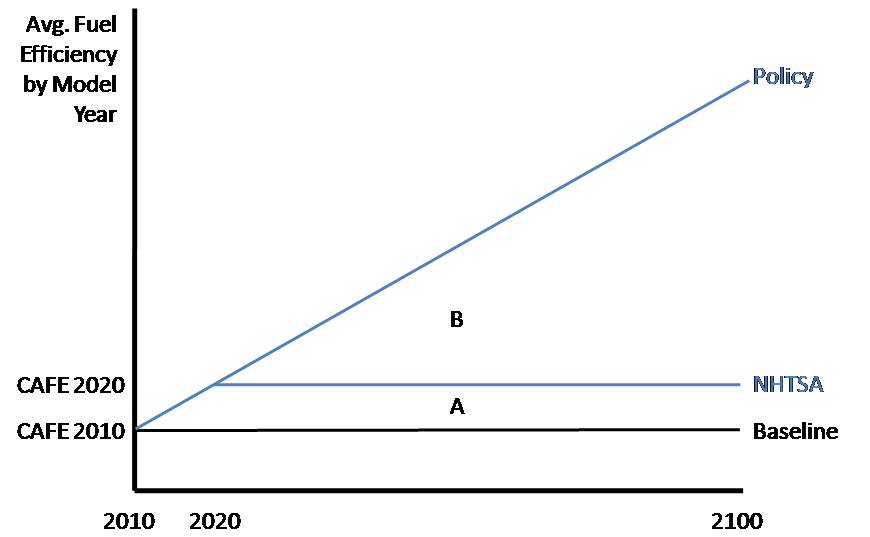 The policy whose impact we are trying to estimate is a policy that targets a certain rate of improvement in fuel efficiency, as drawn above – not a policy of improving fuel efficiency for ten years and then stopping, which is what NHTSA estimated. It is true that neither Bush nor Obama proposed setting CAFE standards for the next 91 years, but the rate of improvement over 2011-15 does determine the potential improvement in 2016-20, and the rate of improvement in 2016-20 determines the potential improvement in 2021-25, and so on. To say, as the NHTSA report does, and Hennessey and Tabarrok echo, that increasing CAFE standards for ten model years will not solve global warming is narrowly true but deeply misleading. It’s like telling someone who’s about to go for a short jog, “Don’t bother – once around the block isn’t going to get you ready for a marathon.” Sure, you have to train for months – but you have to start with that first run. And if you don’t go once around the block today, you won’t be able to go twice around the block tomorrow.

This isn’t a Bush vs. Obama thing. Both Bush and Obama said we have to go once around the block today, and twice tomorrow, and so on for a week. (Obama said we should go a bit further each day than Bush, but you’ll note that the difference between Bush and Baseline is bigger than the difference between Obama and Bush.) The issue is that the NHTSA said one week of training wouldn’t be enough to run the marathon. You can’t conclude from that that one week of training is pointless.

The immediate question is, how much bigger is A + B than just A? In the picture above, A + B is 4.8 times as big as A. (Think of A as one slice that is 85 years long on average; B is eight slices, ranging from 75 years long to 5 years long; all the slices are the same width.) This is not quite accurate, first because model years phase into the overall fleet over time, and more importantly because we don’t know how long fuel efficiency increases can be roughly linear. (At some point, if we have practical fuel cell cars, there could be a huge jump upward.) But it will do as a crude ballpark estimate. If we go back and apply a factor of 4.8 to the improvements we saw above (extrapolated over all GHG sources), we get this:

Of course, these numbers are crude estimates. But this is the order-of-magnitude impact we’re talking about – hundreds of parts per million, not 1.0 or 1.6 parts per million. By extrapolating over all GHG sources, and by assuming continued effort past 2020, we add two orders of magnitude to the NHTSA estimates. These things won’t happen by themselves; we need to do what we can about those other GHG sources, and maintain the political will for more than a few years. But increasing CAFE standards can have the right order-of-magnitude impact; it’s not a waste of effort.